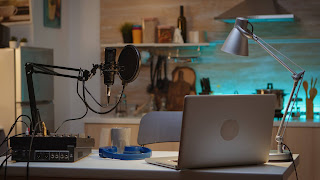 The voice acting industry is changing. Voice actors are now responsible for their own branding, marketing, and performance management. New technologies have changed the way voice actors interact with auditions for jobs. It's never been a better time to be in the industry. Voice Actors are no longer just hired hands; they're entrepreneurs that need to create content, manage their careers, and maintain relationships with clients.

The increased demand for good voices also means there's been an increase in competition from all over the world, including from countries where English isn't spoken natively! This blog post will go into some of the ways this industry has changed over time and how you can stay up-to-date with what's going on today.

1. Voice acting is becoming more popular with the rise of new technology

This opens up many opportunities for people with little experience to learn voice acting skills with better training methods. Technology has also made it possible to record audio on your phone or tablet without spending too much money. These options make it easier than ever for people passionate about voice acting to join the industry.

2. With voice acting, brands can get relevance, which has led to an increase in demand for voice actors

Voice acting has been around for a long time, but it wasn't until recently that it became accessible to everyone. Voice acting provides the voice in production, such as a film, video game, or television show, and can be done by anyone. This accessibility has led to an increase in the demand for professional voice actors.

3. The industry is changing due to the increased use of social media platforms like YouTube and Twitch that allow users to monetize their videos

A recent trend that has been observed is the increasing use of social media platforms like YouTube and Twitch as a means to make money as a voice actor. In these platforms, voice actors can earn revenue from ads placed on their videos. This is due to the increased internet consumption rate by viewers who prefer to watch videos online rather than on TV.

4. Increased competition among voice actors forces them to improve their skills to stand out from the crowd

The voice acting industry is also changing because increased competition forces voice actors to be more creative and dedicated. If they want to stand out from the crowd, voice actors will need to work harder (and smarter). They'll need to study other voice-over artists so that they can improve their skills. They'll need to attend acting or voice acting workshops in their local area or hookup with well known pros who conduct legitimate, professional study courses online.

With the increased use of social media platforms, it is now more possible than ever to make money as a voice actor. However, this has led to increased competition among actors and forces them to improve their skills or risk being left behind. The best way to stand out from the crowd is by finding your niche within the industry. What are some ways that you can distinguish yourself? Your "niche" will become your signature voice or your "money" voice.