Are Your Demos Over Produced? 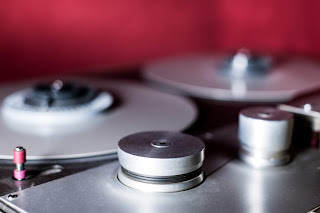 Before I explain the title of this article I should mention a few things first. Like many beginning voice talent back in in the early 1990s I did not have a lot of actual recorded work to create a good demo from. So I had to fake it a bit by recording sound clips from scripts I found or wrote myself. Back then, I was recorded on 2” analog tape. Which was then transferred to DAT tape from which I made my cassette tape copies. Whoopie! Pretty high tech stuff, huh?
The recording quality, however, was excellent since I was being recorded by a good engineer in a famous Nashville studio known for it’s music production. But still, every cut on the demo sounded the same… too similar. So, it was really obvious that my demo did not consist of actual work but was all “fake” work, recorded at the same in the same place. Music and SFX were created by the engineer. I can spot this type of demo easily when I listen to some demos from newer talent.

When faced with this dilemma I suggest you at least record your “clips” at different studios or with different mics to vary the sound a bit. Not that you are trying to fool anyone but that it shows that you are at least getting around doing voiceovers. This will also add interest and diversity to your demos.

Just make sure that your demos are not overly “produced”.
Back when I made my first few demos, all the production work was BIG. But I believe that today a HUGE, over produced demo from a voice actor/voiceover talent is overkill. Most clients… film & commercial producers, TV/radio producers, video production companies, etc.
are more interested in hearing your VOICE and a good strong, authentic performance. Rather than an overblown demo, all recorded at the same time, same place. But you still must maintain a broadcast quality sound throughout your demo.

Now, having said that… here’s the thing! When you have enough great material to put together a strong, interesting demo that is a good repeatable representation of your voice and what you can do with it, then by all means make your demo by combining those clips. Now, what’s pretty slick is… those clips you have from actual work have already been fully produced. So, you simply have to put the clips together in an interesting, clever, professional way to create an effective demo. Since your voice is often EQed/processed and/or mixed differently by different producers, you will have a diverse sounding demo that showcases you as an obviously working talent.

These days I produce my own demos. Many of which are geared toward the various industries that I tend to work in. Such as with my Agriculture Demo, Health Care Demo, Financial Demo, etc. Maybe the word “produce” is a bit of a stretch since I’m using clips from the work I’ve done (already fully produced), tweaking the levels or EQ a bit maybe and overlapping/quick-fading each clip to create a 1:00-1:30 demo.

Now, I don’t always recommend that talent create their own demos. Especially if they are a newbie and are still learning their editing equipment. And some talent just don’t have the “ear” for that.

When I create my own demos, I have to “sit” on them for a while. Getting opinions and simply coming back on different days with fresh ears to review what I’ve done to make sure I’ve put together a dynamic, effective demo. This can be a tedious process but is well worth the result. I’ve found that my self-made demos work quite well helping to secure new work.

There is much more to consider on this topic… much more to talk about regarding the creation of VO talent demos. I’ll have to cover that in future articles.

So.. go out there and make some great demos!

*If you'd like, check out some of my DYI demos at www.ricklancesudio.com