How to Avoid Mouth Clicks as a Voiceover Talent 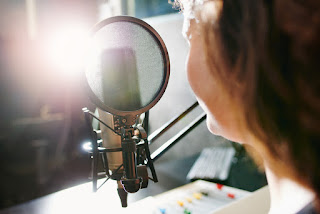 If you are in the voiceover business, mouth clicks are a major annoyance. Any time one of these pop up on a recording, they can bother everyone involved, be it the voiceover talent or the producer and sound engineer.

And the worst part about mouth clicks is that it can happen to anybody, even the best voice over (VO) artists like Sam Elliot.

What Are Mouth Clicks Anyway?

The human mouth and vocal cords comprise of an incredibly complex sound-making system with many moving parts.

Three parts of this system are involved in the accidental creation of minor clicks and pops we call “mouth clicks.” The movement of the tongue and jaws create little saliva bubbles inside the mouth that often pop, creating small noises, or mouth clicks.

Why are Mouth Clicks a Problem for Voiceover

Mouth clicks happen all the time when we speak. But they do not pose a problem in daily life because the human ear is not sharp enough to catch the noises over our voices.

A high-performance mic inside a recording studio, on the other hand, is capable of catching and amplifying these faint noises. Once they become a part of the recording, they cause interference, distracting the listeners.

What Can a Voiceover Talent do to Avoid Mouth Clicks

Hydration is key to preventing the occurrence of mouth clicks during a recording session. Drink plenty of water starting several hours before your recording session to avoid having a dry mouth. Eating green apples can help as well. Also,... believe it or not... eat some potato chips. The oil from the chips can actually coat your mouth leaving a film along your teeth and gums that softens mouth clicks.

Another thing that you can do is stay a bit away from the microphone.
But you have to be careful not to overdo it, as that can result in a fainter voice recording with plenty of ambient noise. To compensate, you have to learn to project your voice a bit further. This allows you to stay farther away from the mic without impacting the audio quality. But, of coarse, there's a delicate balance to achieve here when you're trying to speak in a natural way.

Sound Engineers Can Also Do Their Bit

If the role of the voiceover talent is to prevent mouth clicks, the role of the engineer is to clean up what has already been recorded. They can use digital audio workstation tools to draw out the offending waveforms from the recording. But this can be tedious work and not really the best way to handle the problem.

This is a rather cumbersome process and can earn you the ire of sound engineers, even if you are a big shot like Sam Elliot! These days, modern plugins and sliders have automated the job somewhat, making their lives much easier.