Transition from Stage to Studio 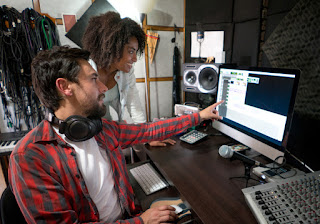 In the last blog post, I wrote a bit about the major changes that one would have to contend with when trying to transition from stage acting to voiceover work.  With all of that said, however, there are a lot of advantages that come with having had acting experience.

Regardless of how the scene is set, acting is acting.  A person who can successfully ‘become’ another person on stage will find it much easier to accomplish the same feat in the recording studio. However, it is not just the skills of an actor that you bring to the table.

Likely, if you have spent very much time at all working toward a career as a stage actor or actress, then you have had to contend with the audition process many times.  This will most definitely give you a step up from those who are new to voiceover with no acting experience.  You will, of course, have a better idea of what is expected of you when you walk into a casting call or audition setting. Furthermore, you have likely already experienced harsh critique and failure in such a situation.

Though no one wants to experience these things, they are a part of the business, and you have the advantage of already knowing how to contend with them.

There is much more that your stage experience will have prepared you for:

1. The need for practice.  Undoubtedly, you partook in many hours of rehearsal before each show.  You can put to use that work ethic when it comes to voiceover work, which will require regular practice.  Many jobs will also require multiple read-throughs, not unlike having to read through the script with your fellow stage actors over and over again.

2. The occasional audience.  There may be times, as a voiceover artist, when you will have to do some of your auditioning or recording in front of an audience.  Hopefully, you will be able to draw on your stage experience to find a level of comfort in such a situation.

3. Proper breathing and enunciation.  You had to control these things on stage and it will be even more important to do so in the recording booth.

So, if you are considering making the switch from stage to voiceover, you may just find that you are able to carry many of your skills into your new profession.
Posted by Rick Lance at 6/29/2017