The Argument Against Wearing Headphones for Voiceover 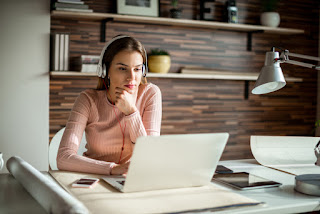 The studio set-up list posted by nearly every voiceover website will include a high quality pair of headphones.  This is the advice given to new voiceover talents trying to break into the industry, yet there are many in this business that would adamantly disagree with that addition to the list.  There are many (some with very long and notable careers in this industry) who suggest that headphones should not be recommended to the up-and-coming voiceover artist.

What is the argument for removing this item from the list?

Typically, for those who are not in favor of headphones for voiceover, there are two main arguments:

#1. Headphones Block Too Much Sound during Recording

Imagine that you are in your recording studio, excited to begin work on a big job that you just signed.  You slip on the large, well-cushioned headphones, and begin to read the script.  Things are moving along fabulously.  You feel entirely confident that you are in the midst of producing one of the best voiceover readings you’ve ever done.  An hour or so into the recording, though, a dog starts barking just outside your window.  The pitch of the bark is loud enough for your microphone to pick it up, but you can’t hear it because of the high quality headphones you invested in.  The dog continues to bark for twenty minutes, creating a long stretch of audio that is going to be particularly difficult to edit.  This is the fear of many voiceover artists – that the headphones will drown out those sounds that could be damaging to the recording process.

#2. Headphones Encourage the Voiceover Talent to Over Analyze Voice

The ability to block out so much background noise also means that your headphones make you focus on the sound of your voice.  Good news, right?  Yes and no.  While we do, as voiceover artists, want to be aware of what we sound like at all times in the recording studio, this can also be a big distraction.  It is very easy for the artist to get caught up on the inflections, breathing patterns, etc., making it difficult to remain ‘in character’.

So, should you have headphones?  Truthfully, it is a personal choice.  It may be wise to try sample recordings with- and without them, to determine which you prefer.  You may also find that you like them at certain times, and prefer to work without them at other times.  That’s fine too!  It is all about making yourself comfortable in the studio.

Personally, I've learned over the years to wear two hats when recording... one as the talent, one as the engineer. So that I can hear all the little things... mouth clicks, extreme breaths, chestiness, etc that can arise in a take. Once I got that down, I was able to achieve a balance and my performances were not interfered with by the technical aspects. It just takes practice.
Posted by Rick Lance at 4/04/2017