Why Women Should be Recording More Movie Trailer Voice Overs 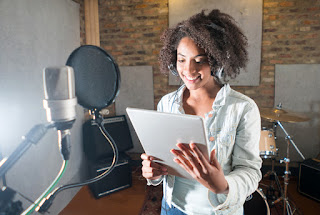 Think of every movie trailer voice over you’ve ever heard. How many of those trailers have been recorded by women? One? Two? Probably not many, and that’s because this segment of VO has been dominated by male actors since the dawn of movie trailers.

But why? For a few reasons, probably. One has to do with studies that have been done on focus groups and how a majority of them prefer deep voices. Another reason is simply because that’s what we’re used to, and change is tough for most folks. A third possibility is the simple fact that there are far more male voice over artists than female ones, so naturally movie trailers would follow this trend.

Maybe it’s time for a change, though. Maybe us men-folk need to step aside and let the ladies enjoy some of the fun that goes with recording movie trailers.

There are a few reasons why I think it’s time for a change. First, change can be a very good thing. It keeps us on our toes, it activates different parts of our brains, and it just makes us think. All of these are positive effects that may occur simply by changing things up a bit.

Second, our brains actually prefer female voices. Before we’re even born, we hear and respond to the female voice (our mothers). So it makes sense that an innate preference for the female sound is in all of us. Plus, for certain films, such as children’s movies, a female voice naturally makes more sense for the audience that is being marketed to.

Finally, people (and especially men) respond differently to the sound of a female’s voice. In a study by psychologist Michael Hunter, it was found that a woman’s voice triggered a more complex reaction in the brain. When exposed to the sound of a woman’s voice, an area of the brain that processes and decodes complex and nuanced sounds, like music, is activated. According to the psychologist, this response may result in better communication, with women being able to communicate more information due simply because of the sound of their voice.

So what does all that have to do with movie trailers? Well, maybe nothing. Except I feel this is an important topic worthy of discussion, and I really do believe it is time for women to play a stronger role in this VO niche. Even science agrees. So we'll see how things progress along in the future!